This image of paradise used to sell a vision of Sāmoa to tourists is both glamorized and deeply heteronormative. Many aspects of Sāmoa’s past and present are excluded from this commercial concept, such as the island nation’s vulnerability to climate disaster, its heritage as a colony of Germany and New Zealand, and the presence of a thriving LGBTQ+ community. In particular, commercial narratives erase the stories of Fa’afafine people, Sāmoan for “in the manner of a woman,” referring to Sāmoa’s third gender community.

These untold stories of a marginalized community are made visible in the work of artist Yuki Kihara, a New Zealander of Sāmoan and Japanese descent, representing New Zealand at this year’s Venice Biennale with Paradise Camp. Born in Sāmoa, she moved to New Zealand as a teenager for her studies. For the past decade, she has primarily lived and worked in her home nation. Kihara is the first artist to represent New Zealand at the Venice Biennale who is Pasifika, Asian, and Fa’afafine.

Kihara attempts to challenge and undermine colonial images of Sāmoa through a radical camp aesthetic (as alluded to in the pavilion’s title). The artist offers a new term for imagining a camp notion of paradise defined by Pasifika Indigenous communities: “In-drag-enous.” The installation revolves around a central cast of Sāmoan Fa’afafine people, who Kihara invited to pose for a series of 12 color-saturated tableau photographs, each of which reworks a specific painting by Gauguin. The works are inspired by Sāmoa’s annual Fa’afafine beauty pageant, for which Kihara was a judge in 2017. These entertaining events are expressions of LGBTQ+ empowerment and also raise awareness of issues faced by the Fa’afafine community.

In the words of curator Natalie King in the accompanying hardcover publication, the New Zealand pavilion is “an ensemble exhibition.” The 12 photographs are set against specially designed geometric wallpaper and a blown-up image of an apparently paradisal beach, which was decimated by the 2009 tsunami. The walls also feature a colorful display of vintage travel posters advertising cruises to the Pacific islands, newspaper cuttings, archival photographs, and pamphlets, contextualizing historic colonial representations of Sāmoa and its people.

Read the review in full here on Hyperallergic’s website. 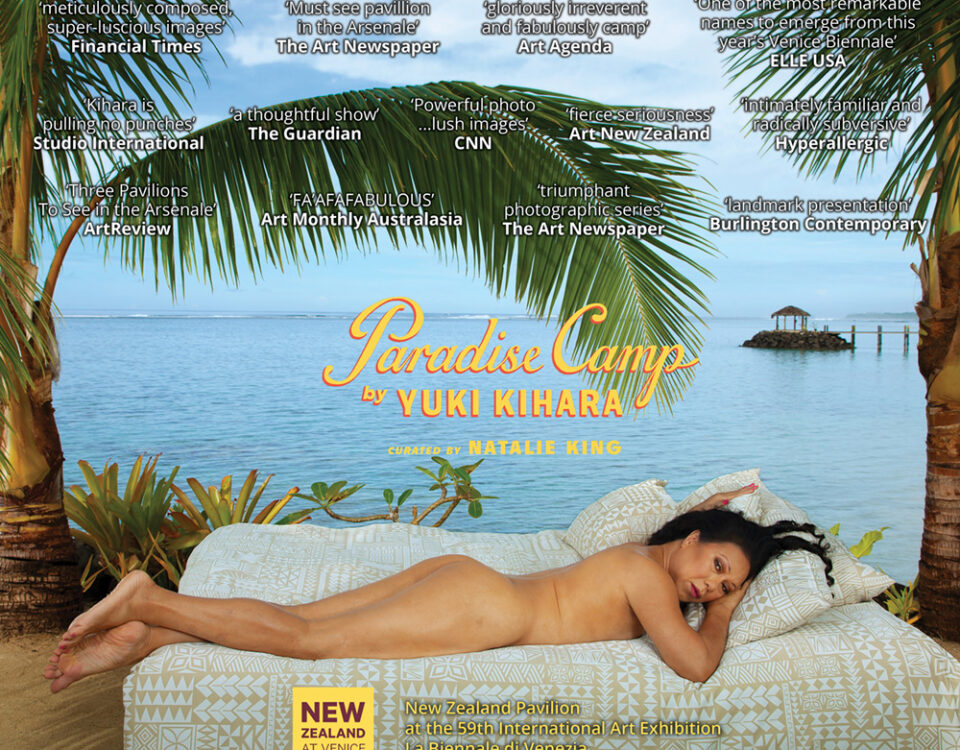