A conversation with Judy Millar

Signs & Wonders connects aviation, modern Pentecostal movements, education, and simulation software, inciting the viewer to consider the global distribution of technology and belief. Our personal experience of this exhibition, as with much of Stevenson’s work involves the discovery of numerous unravelling threads between art and anthropology, documentary object and memento, purely private mythology and collective reception.

Filling the darkened gallery are four hand-built 1980s-era flight simulators. The cockpits are approximations, constructed using techniques and materials that might possibly be aviational, but more rudimentary and provisional in form than the real thing. Each of the cockpits is paired with a projection screen showing a loop of computer simulated flight which transports the viewer – from take off to landing – on aerial journeys over lush mountainous geography.

These simulated flights are actual routes between village locations in the remote highlands of Papua New Guinea, one of the world’s most culturally diverse countries and the least explored. Small aircraft have long played a vital role in navigating this remote terrain, bringing in goods, people and other cultural traditions from the outside world. The topography has proved to be some of the most challenging for aviation where short, uneven landing strips are commonplace and extreme weather conditions prevail. Significantly, many of these remote airstrips are operated by missionary aviation organisations whose persistence and resolve in the face of the difficulties presented has brought more to these areas than mere successful transport logistics. Papua New Guinea, an independent state within the British Commonwealth, has hundreds of indigenous ethnic groups and more than 800 languages listed nationally. Despite such diversity it has changed to become one of the most Christianised regions on the globe. Now approximately 95% of the country’s citizens identify themselves as members of the Christian community.

The manner in which the flight simulators are presented – in a kind of demo-mode, semi-active state – suggests an educational environment, maybe the setting of a flight training camp or an anthropology museum display perhaps. While the flight simulators’ empty cockpits evidence the possible interrupted presence of their trainee occupants – a reference to the ill-fated end of some pilot missionaries or more prosaically a flight school classroom on break. Further more the various on-board props, flight blankets, books and carpets laid out in the gallery hint at something more foundational. Besides flight simulator manuals, the cockpits contain numerous religious books by authors such as Hal Lindsey, C. Peter Wagner, John Wimber and George Eldon Ladd. Published from the 1960’s onwards, many of these authors were involved with the School of World Missions at Fuller Seminary in Pasadena. Becoming chief architects both theologically and practically, they laid the groundwork for the exchange between center and periphery, the engine of the global proliferation of Pentecostal and Charismatic Christianity.

This epicenter of activity in Pasadena spread widely and became known as the ‘Third Wave’ and also as ‘Signs and Wonders’. It’s a form of religious practice that’s deeply experiential, and included prophecy, healing, speaking in tongues, and miracles, all of which were associated with messianic return. It arose in many places, such as Michael Stevenson’s native New Zealand, and in North America via the association of Vineyard churches and more latterly the Toronto Blessing. This particularly ecstatic revival began in the early 1990s at Toronto Airport Vineyard (known today as Catch the Fire Toronto). Their services included ‘carpet time’, where members would ecstatically fall onto the carpeted floor, sometimes roaring like lions, claiming to be filled or ‘soaked’ in the Holy Spirit.

In part the success of missions in ‘other’ territories like Papua New Guinea was the technique of superimposing Christianity and allowing it to coexist in parallel with traditional beliefs in a spirit world and in the power of magic and sorcery. The imposition of one system onto the other, one technology onto another, one temporality onto another provides the airspace in which Signs & Wonders operates. The density of this air is heavy, close to what cultural anthropologists Steven Connor and Maria José de Abreu have referred to as a pre-modern conception of air being “thickly populated and animated by a plethora of entities, substances, odors, humors and specters.”

Embedded in Stevenson’s arrangement of the simulators is the potential for an eschatological event. Placed in opposing pairs with the screens showing the same flight route but flown in opposite directions, they thus share the same airspace and flight paths without the aid of air traffic control, giving rise to the potential for a mid-air imposition and ensuing apocalypse. In this world, however, any such catastrophic outcomes are held in suspension: instead of collision, the viewer simply experiences onward flight as the aircraft pass invisibly around and through each other on their way to their respective destinations.

This is the third iteration of Signs & Wonders, following exhibitions at Kunsthalle Charlottenborg, Copenhagen (2015) and Midway Contemporary Art, Minneapolis (2016).

More information and photo’s at www.carlfreedman.com

More about Michael Stevenson at Venice in 2003 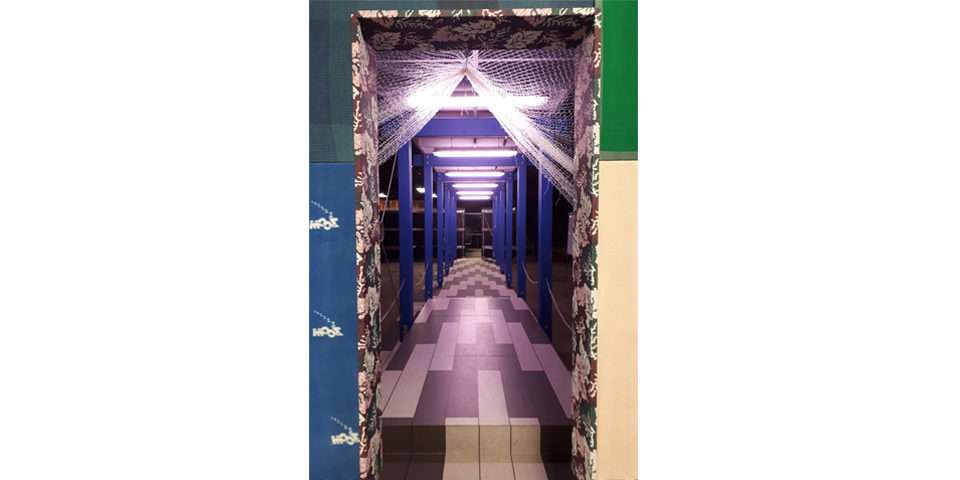