The exhibition Lisa Reihana: Emissaries is housed in the Tese dell’Isolotto, one of the oldest and most expansive maritime buildings in the Arsenale, the biennale’s central exhibition area.  This is the first time the New Zealand pavilion has been located within the area.

“The Biennale Arte is the most prestigious event of its type in the world and New Zealand’s participation indicates that we are a recognised contributor to the contemporary art world,” said Dame Patsy Reddy.

“New Zealanders can be extremely proud of Lisa Reihana’s work. Emissaries is both technically brilliant and profound and I expect it to be a huge drawcard for visitors to the biennale.”

The artist re-casts the original European “fabrication” of the Pacific to suggest a more complex story.  Characters are drawn from across New Zealand, the Pacific and Europe with the death of Cook in Hawai’i as a dramatic moment of “rupture” in the video.

As the 23.5m long by 3.3m high work is projected within the Tese dell’Isolotto an accompanying soundscape weaves together live capture of performances, the winding of an original clock used on Captain Cook’s voyages, and rare recordings of the taonga pūoro (Māori instruments) he collected.

The artist has created for the exhibition in Venice a “constellation” of five sculptural “perspectival tubes” which visitors can look into. They include transparencies that focus on moments associated with in Pursuit of Venus [infected], 2015–17. Also, flanking the work, are two life-size emissaries, an elaborately costumed Tahitian Chief Mourner at the entrance and Joseph Banks, the ambitious English naturalist and explorer, at the exit.

“Venice influenced maritime trade and exploration throughout most of the last millennium.  The islands of Aotearoa / New Zealand were among the last to be discovered by humans, and it is hard to think of a better place to exhibit such a mighty artistic contemplation on the impact of contact across the oceans,” said Commissioner Alastair Carruthers.

Arts Council Chairman Michael Moynahan congratulated Reihana on creating such a spectacular exhibition, the first time New Zealand had presented such an ambitious digital work at the biennale. “We’re delighted with this wonderful work and acknowledge the enormous amount of effort Lisa has put in and the support she has received to create it.”

After the exhibition in Venice, in Pursuit of Venus [infected], 2015–17, will be shown in Campbelltown Art Centre in Sydney from January 2018. New scenes in the work featuring dancers and weavers from the Aboriginal Koomurri community were shot with the support from the centre.

In 2018 the work will also be exhibited by the Royal Academy of Arts in London as part of a major survey of the arts of Oceania marking its 250th anniversary.  The academy was founded in 1768, the same year Cook set sail to search for a southern continent.  In 2019 the work will be presented at the Musée du quai Branly – Jacques Chirac, Paris, as part of their Océanie exhibition.

In a special cultural exchange between tangata whenua Lisa Reihana and the Governor General arrived at pavilion on the Disdotona, Venice’s largest gondola, with 18 rowers from the Canottieri Querini Rowing Club. The historic vessel has carried previous national emissaries through Venetian waterways and compliments references to the Nookta, Māori, Hawai’ian, Tahitian and English vessels that appear in work.  Each waka referenced in the work hails from island nations whose existence and philosophies relate to Te Moana Nui a Kiwa (the Great Ocean), which connects us all.

The exhibition opening was also attended by La Biennale di Venezia President Paolo Baratta and the artistic director of the Royal Academy of Arts, Tim Marlow. 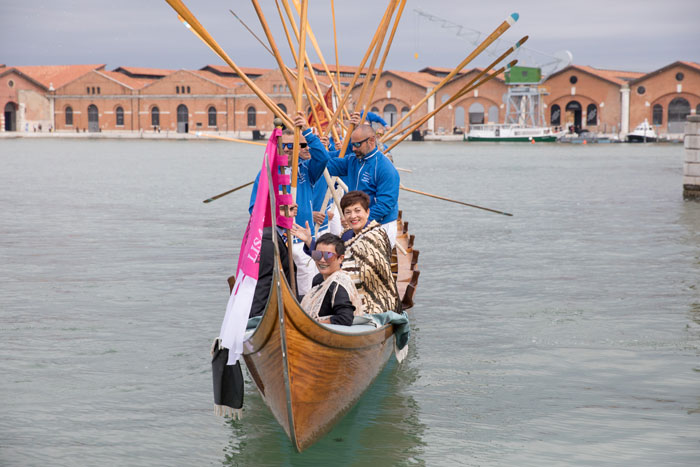 Lisa Reihana and Governor-General, Her Excellency The Rt Hon Dame Patsy Reddy arrive for the official opening of the NZ pavilion on the Disdotona, with 18 rowers from the Canottieri Querini Rowing Club. Photo: Michael Hall. Image courtesy of New Zealand at Venice.

Creative New Zealand funds and manages New Zealand’s presence at the Biennale Arte for the almost seven month duration and is pleased to again be working with Museum of New Zealand Te Papa Tongarewa as key partner and for the first time with Auckland Art Gallery Toi o Tāmaki as presenting partner.

The initiative has also been generously supported by New Zealand at Venice patrons and sponsors.

Almost 10 years in the making, in Pursuit of Venus [infected], 2015—2017, is a complex digital audio-visual project that is vast in conception and ambitious in scale. The work employs animation and filmic techniques and comprises over 1,500 individual digital layers totalling 33 million pixels per frame. Future-proofing is ensured in the 15k resolution that the work inhabits. In Tese dell’Isolotto, the single channel panoramic work is delivered by multiple DLP laser projectors at a scale of 23.5 x 3.3m accompanied by 7.1 surround sound.

In 2015, the Auckland Art Gallery Toi o Tāmaki exhibited an earlier version of in Pursuit of Venus [infected], 2015. For Biennale Arte 2017, the artist has realised the project in its entirety which encompasses eighty vignettes of action scripted by the artist. Through live action capture, the performative gestures of song, music and customary ritual unfold as vignettes which are drawn from the breadth of the Pacific Ocean, including Nootka Sound, Hawai’i, Tahiti, Tonga, Cook Islands, Australia and Aotearoa New Zealand.

The Les Sauvages de la Mer Pacifique scenic wallpaper was manufactured by Joseph Dufour & Cie and illustrated by French designer Jean-Gabriel Charvet in 1804—5. It was inspired by the voyages of British navigator James Cook, and French explorers Louis Antoine de Bougainville and Jean-François de La Pérouse throughout the Pacific Ocean in the 18th century. Various versions of this widely distributed wallpaper are held in public and private collections across the world.

Of Māori (Ngā Puhi, Ngāti Hine, Ngāi Tu) and British descent, Lisa Reihana is at the forefront of experimentation and has helped forge the development of time-based and media art in Aotearoa New Zealand. Influenced by indigenous filmmaking, her technically ambitious and poetically nuanced work disrupts gender, time, power, and representational norms. Reihana’s work spans film, sound, photography, spatial design, live-action, costume and sculptural form. Her art making is driven by a powerful connection to community which informs her collaborative working method described as kanohi ki te kanohi (face to face).  She completed a Masters in Design from the School of Visual Art and Design, Unitec in Auckland in 2014 and graduated with a Bachelor of Fine Arts from Elam School of Fine Arts, University of Auckland in 1987. Reihana lives and works in Auckland, Aotearoa New Zealand.

Reihana has undertaken numerous international residencies and commissions, was made an Arts Laureate by the New Zealand Arts Foundation in 2014, and received the Te Tohu Toi Kē Te Waka Toi Māori Arts Innovation Award from Creative New Zealand. She was shortlisted for the Signature Art Prize at the Singapore Art Museum in 2014 for in Pursuit of Venus; as well as for Double Take, the Anne Landa Award, Art Gallery of New South Wales in 2009 and The Walters Prize at the Auckland Art Gallery Toi o Tāmaki in 2008, both for Digital Marae. She was shortlisted for The Walters Prize 2016 for in Pursuit of Venus [infected], 2015. Reihana was named a 2017 Distinguished Alumni by the University of Auckland, in recognition of her outstanding achievement in the field of fine arts.

New Zealand at Venice – Past Years 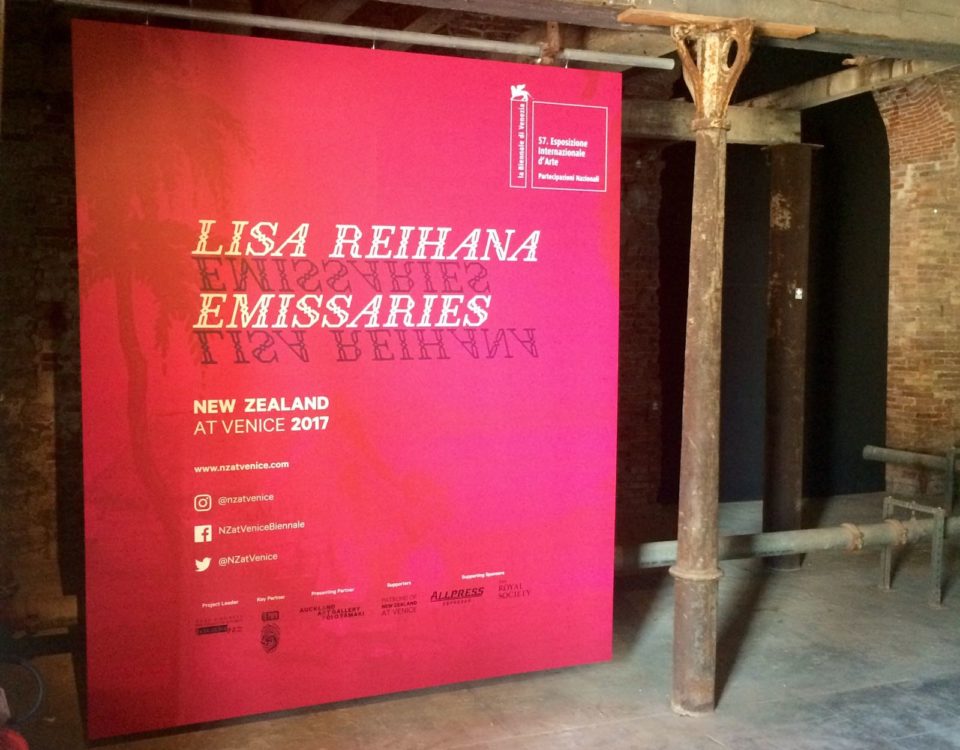